QVGE is a multiplatform graph editor written in C++/Qt. Its main goal is to make possible visually edit two-dimensional graphs in a simple and intuitive way. 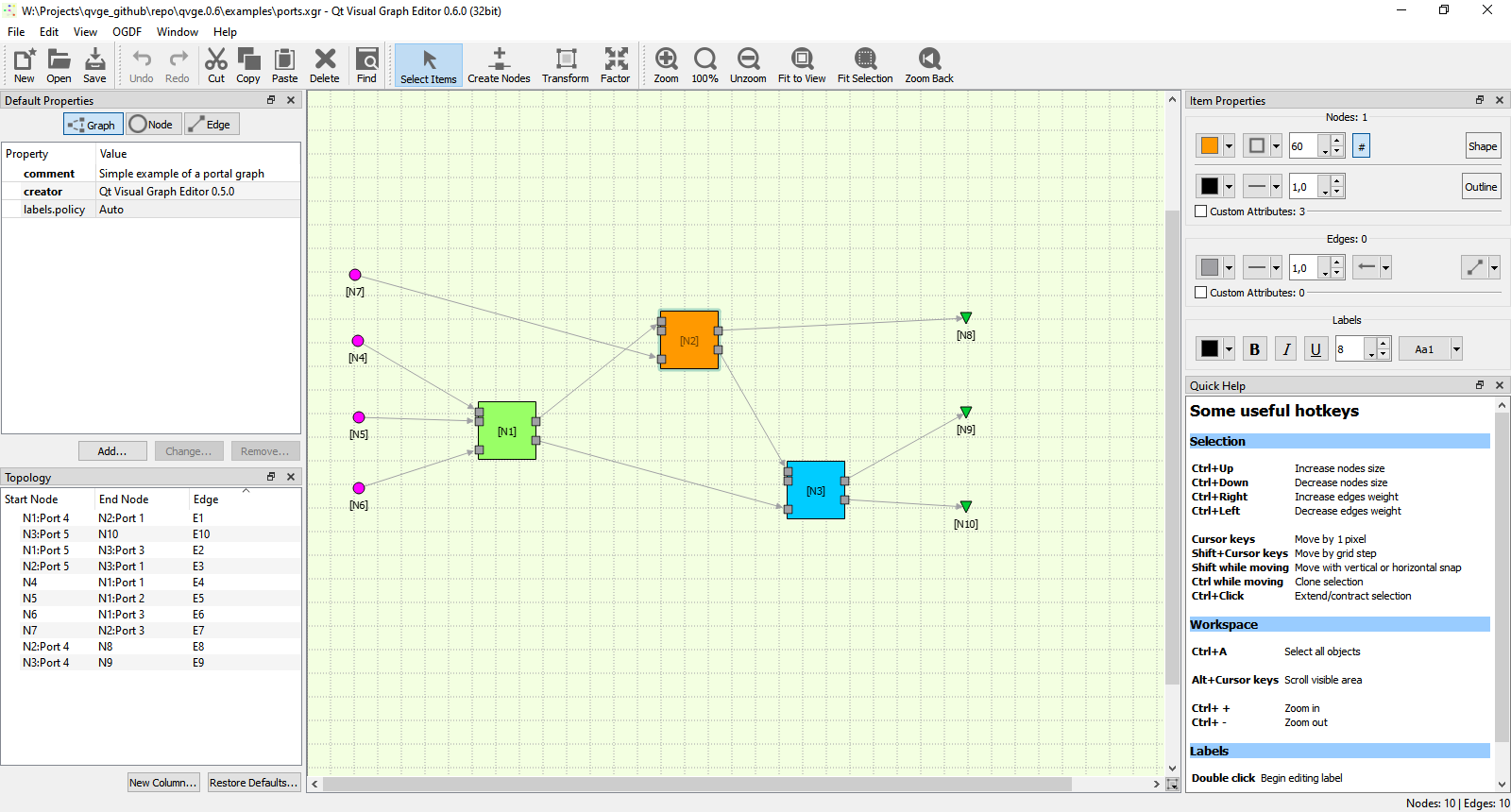 Please note that QVGE is not a replacement for such a software like Gephi, Inkscape, yEd, Dia and so on. It is neither a tool for “big data analysis” nor a math application. It is really just a simple graph editor with some advanced features (i.e. GraphViz integration).

Since QVGE is a free software, it is developed in the free time on my own costs only. If you like the software and wish to support its further development, you could make a small donation using the button below:

“This graph editor is very promising for every day modeling.”

“Qt Visual Graph Editor is a fairly straightforward, open-source tool that enables users to design relatively simple graphs for their projects. It comes with a decent set of features and is very intuitive.”

“It seems to me that my development have become more efficient after when I began using QVGE. This is much more useful than UML, because that I don’t have to change sheets and to remember several usages and I can draw graphs swiftly.”

“Lightweight, multi-platform graph editor that allows users to edit two-dimensional graphs in a quick and intuitive way, as an alternative to more complex software.”

“Its user experience is very good. It’s because how to operate is sophisticated so intuitive and very simple. A user can entirely concentrate on essence of content the whole time. Because of simpleness, the content is not noisy and easy to understand, and usable much generally to design, refactor and output a structure such as a organization, a software, logic, routes and all other relationships without learning usage separately.”

“I have been using QVGE for a few hours a week for over a year. It made my life better.”

Prebuild Windows binaries can be loaded from here:

Or you can get QVGE’s sources and build them by yourself. In this case you need to have installed Qt 5.x toolkit and corresponding C++ compiler with C++11 support. QVGE uses native Qt build system (main project file is qvgeapp.pro) so it should look like the following for Windows and common Linux distributions:

or, for Fedora-based distributions:

or, for macOS (with Homebrew and XCode Command Line Tools):

(Note: your path to Cellar might differ depending on your homebrew install)

Then run corresponding ‘make’ command to build the application:

Linux only: once the application is compiled, install it using

WARNING: bundled OGDF support has been removed since QVGE 0.6.1 due to memory access issues

In order to build QVGE with external OGDF support (installed in your system): before running qmake, open the file src/config.pri and uncomment the following option:

This will allow to link against OGDF library which is already present in the system. In this case, the following lines have to be changed accordingly:

Then run qmake + make as described in the step before.

Recent version of QVGE has been built with:

Hopefully it can also be compiled with others compilers. If not please do not hesitate to provide description of the issue.

QVGE has been tested on Microsoft Windows 10, several Linux distributions (Mint, Mageia, Fedora etc) and macOS 11.2 Big Sur. Theoretically it should run on (almost) any OS which have Qt 5.x installed.

QVGE can be compiled & run under Cygwin.